Hi Friends! I have been lost from the Internet for ages! I am still in Arizona, after taking a side trip up to Provo, Utah to visit family. I have been so disconnected! When I first got here I crashed my computer, then I ran over my cell phone. Very disconnected! Finally I got my computer up and going again. Dell helped me reload everything that was apparently dead from some nasty virus. I seriously don't know what gives some people such perverse pleasure in disabling the computers of strangers. I can only hope that Karma will visit them in kind.

Dad is doing very well. He is back to his normal self and his busy schedule. He plays cards every Wednesday night and makes home visits to people from church to check on how they are doing. He has a regular route of people that he visits monthly. Sometimes he forgets that he is 89 years old and wonders why he doesn't move as fast as he wants to. He is still very sharp, but at 89 and living alone he has developed some funny habits. For example, he uses paper plates, and doesn't want to be wasteful, so he washes them off when he is done. He loves his TV shows and records them on his DVR. But usually he watches them while they are regularly scheduled and then deletes them when they are over. Recently he bought some freeze dried meals that he thought sounded great. I think they were intended for emergency preparedness, or maybe camping. He prepared one of the meals for us one night by adding 2 cups of boiling water and letting it sit 15 minutes. We had "lasagna". Let me explain that whenever we go out to dinner he finds something in the meal that is not up to his expectations and feels the need to tell the wait person so they can raise their standards. Somehow though, this freeze dried meal tasted just dandy. I took 2 bites and opted for a peanut butter sandwich. He ate his all up and told me not to throw out my portion, that he would heat it up later. I tell you this with the warmest affection for my Dad. We all do funny things, and I suspect as we get older we become even funnier. My kids laugh at me already, and I don't care a bit. Their day will come! Mostly though, in our family, we are pretty good at laughing at ourselves. Like me running over my phone with the car. As one person told me, it shouldn't be funny, but it kind of is. I agree, otherwise why would I even mention it? 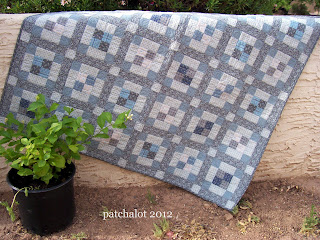 I have been trying to get a few things done as far as sewing goes. Here is a baby quilt I just finished for my nephew's baby. They chose gray for the babies room, and I found a darling blue and gray collection of prints designed by Buggy Barn that hopefully they will like. Gray is a really popular color right now and this line falls into my traditional way of thinking. 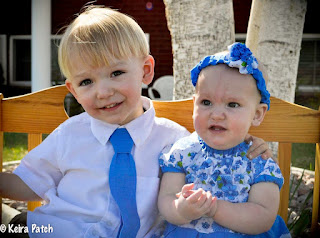 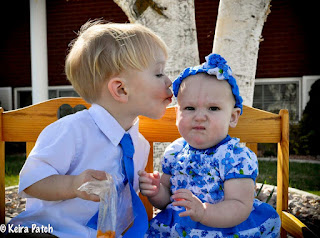 I was in Utah for Easter and staying at my son's house. Here are a couple photos of Isaac and Ellie. Aren't they a riot? You have no idea how many pictures my daughter-in-law took of these two. Ellie is the most adorable baby, but try getting a photo of her! She is hilarious! Keira made Ellie's dress and Isaac's tie to match. She is so talented!

I guess that is all for now. My plaster guy never showed up and says he will be here tomorrow. I am nervously connected to someone else's wireless Internet. Hopefully I will get back online again soon.

Farewell from sunny Arizona, where it is already reaching 100 degrees!