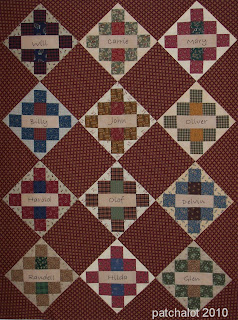 My ancestor quilt is coming along. This quilt is for my grandmother's family and shows her parents names and that of their ten children. As you can see, all the names are embroidered and the blocks are sewn together. The blocks are odd sized, 6-1/2" finished. 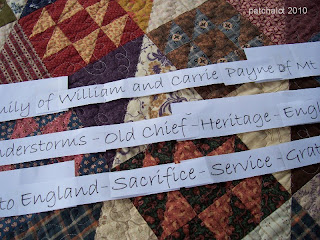 Next are the border strips. I first decided what I wanted embroidered on the inner border, starting with The Family of William and Carrie Payne, of Mt View, Alberta, then attributes, such as Sacrifice, Service, Faith, etc. I had room for a few other things, so I added familiar things to them, such as Old Chief - a local mountain that my Grandmother talked about; Horse and Buggy, Thunderstorms, etc. I printed these words off from the computer in a size and font that I like, and taped them up in strips to fit the borders. Then I had to trace the words onto fabric with the help of a light box.
Next is the embroidery! I have begun embroidering the strips and they are moving along quickly. This quilt top will be done in no time! 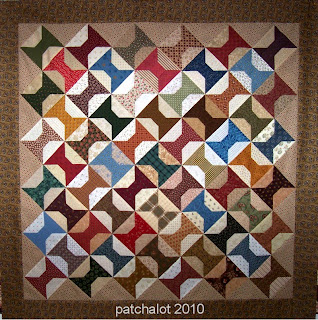 Just a little quickie on my spool quilt, or klosjes, as they call them in the Netherlands. Apparently this spool addiction has spread far and wide. See Valentina's blog for some beautiful pictures and also how to pronounce klosjes.
I decided to forgo a pieced border and instead I added a plain border of what I call army green. It is a Jo Morton fabric and looks as old as the hills, which is why I love it. It gives the quilt a very old look I think. That little brown plaid spool that Karen made just kind of pops out! Karen made me a dozen little spools, and she has set-in seams in hers, so they all show this little square in the center. I mixed them in with mine and Joan's, which were made in a much simpler manner. I didn't want to give them back to her, they were too cute!


Speaking of Karen, I have threatened to send her racing goggles to wear as she races through her sewing projects. I have this image of her in my head with a racing helmet strapped to her chin and a maniacal look on her face as she grips her machine and puts her foot to the pedal. Check out her blog and see her Inca Gold quilt that she has already completed and quilted! What a woman!

I have begun making blocks for my ancestor quilt. (See this post to view the pattern) My grandmother, Mary, had eight brothers and one sister. My grandmother was the oldest child and Hilda, her sister, was the youngest. Mary was born in 1895 and Hilda was born in 1913. Their father, William Payne, was the first Royal Canadian Mounted Policeman assigned to Alberta, Canada. He settled in Mt. View in southern Alberta and there his family was raised. When I saw this quilt all made up the appearance of it took me right to the prairies of southern Alberta. The fabrics looked old and worn, just like I expect the quilts of the era looked when this family was growing up. I have heard all the stories of my great grandfather getting shot by a skunk and sleeping for weeks in the barn; and of the wolf that was stalking the chicken coop. I heard about Uncle Olof falling headfirst off the roof of a shed and into a bucket of bran mush and getting rescued by his brother. I heard about my great grandmother hiding under the bed during thunderstorms because they terrified her. And about my grandmother as a little girl fishing in a stream behind their cabin with nothing but a string and a safety-pin with a grasshopper attached, and catching their dinner without a problem. My grandmother was a storyteller, and for us she created a history and an attachment to a place we have rarely seen, but one for which we have great affection. 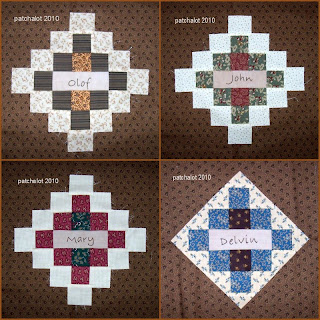 Here are four of the blocks I have completed thus far. The last one, in blue, shows how they will be trimmed down. The dark brown will be the alternate blocks. Funny how the color changed in the different photos. The darker shade is actually more true to the color of the fabric. 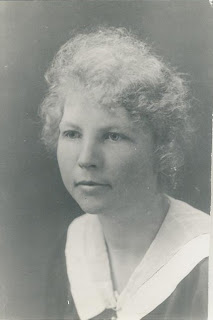 Here is a picture of my grandmother, Mary Payne, as a very young woman, maybe around age 16. 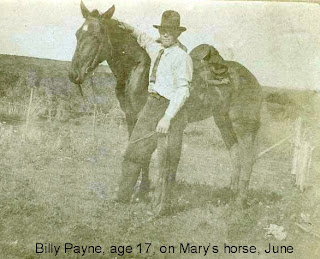 This old photo shows Mary's brother Billy, who was a year younger than she was. It is very easy for me to get caught up in all this family history. I love it!
Along that same vein, I saw a TV show on Friday night that I loved. It is called Who Do You Think You Are? It is a new series, and last week it was about Sarah Jessica Parker. They did a genealogical search for her ancestors and followed her as she went from place to place following the clues to find her roots.
This Friday they will do Emmit Smith. Check it out! In fact, follow the link and you can watch the first episode with Sarah Jessica Parker. 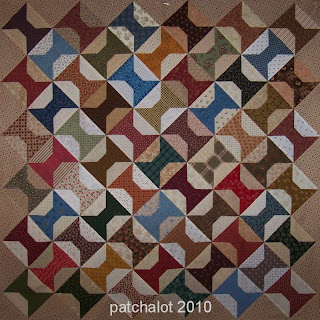 I have been having fun making these little spools this week. Joan from Keeping You in Stitches, got me started. She was looking for people to trade spools with, so I joined in. We traded 25 spools with each other. Then I asked Karen from Sew Primitive if she wanted to trade some spools also. She and I traded another 12 spools.  In the end I laid them all out and this is what I got! I will be adding another border, but don't know exactly what yet. The blocks finish at 4-1/2". So far the top measures about 38" square. 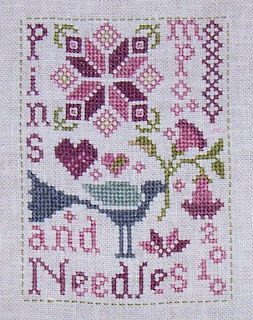 Also, I have been doing a little cross stitching in the evenings. This is a darling one from Blackbird Designs. You may know that they have a blog and show a lot of their stitcheries there. Also they have free patterns occasionally. I have made a couple of those as well.  Don't we all just love to keep our hands busy!