Those of you who enjoy medallion quilts, as I do, will love seeing what Helen, from the UK, made using my Williamsburg Medallion pattern. She made some lovely changes from my original design. 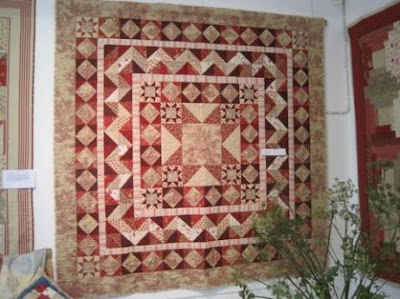 Sue Watters sent me the photo. Sue taught the Williamsburg Medallion as a class in England, and has another class scheduled. Sue has a blog where she shows lots of her wonderful work, plus that of others. I know you will enjoy perusing her blog!
Also, if you go to THIS PAGE in my website, Patchalot Patterns, you can see  the many variations of this pattern that people have sent me. As you will see, my original design was simply a springboard to further creativity. Love it!

Here I sit at the home of my daughter in Missoula, Montana. The kids are watching kid's TV, which is so loud and obnoxious, it makes one wonder what it is doing to the impressionable young minds that will become the leaders of the future. In fact, it makes me wonder if the writers and producers of these programs have some sort of subversive master plan to destroy America through TV. All I can say is, "Stupid, stupid, stupid".


I have been gone from home for a week now and have covered a lot of ground. I flew to Salt Lake City and spent a few days with my son and wife and darling baby, Isaac. This little guy is a joy! I hated leaving him! 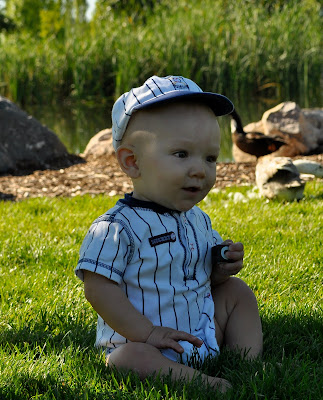 We had our family reunion last Saturday and I had a wonderful time seeing relatives that I have not seen for years, as well as cousins from the Salt Lake area that I always enjoy being around. My Ancestor Quilt was auctioned off for $650! I was thrilled! My cousins were bidding against each other, and sometimes against themselves. Connie and David Slaughter had the high bid. I guess I didn't need to worry that it might not be appreciated. Thanks family!


Stopped at a few quilt shops, sold a few patterns, bought a little fabric. Now I am in Missoula, MT cutting scraps at my daughter's house for a new quilt project. Polly, my daughter, is downsizing and doesn't have room for her/my scraps any more. I forgot some of the cool stuff in her stash! So I am stocking up on HSTs while I am here. Fabric and family--my kinda fun!


Thanks to all my Alberta cousins for reading my blog! I loved seeing you all! 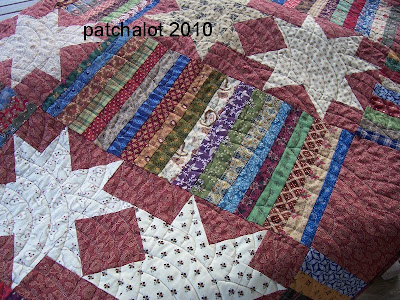 Does anyone remember when I said in January that this is my lucky year? I based that on the fact that my birthday read the same frontwards and backwards: 01022010  Remember? Well, for me, this has been a truly lucky year. I have had quilts published in FOUR magazines this year! To help you remember, they are listed on my side bar. Notice the full length photo of this one as well. This one, above, is the latest and is coming out in McCall's Quick Quilts October-November issue. I named this one Saddle Tramp. You must click on the name to see how they shot it. I mean with the camera. I was hoping they would shoot it with a horse or saddle or fence or something like that. And they did! Yay!! I am very happy!
Please take note of the way this quilt is quilted. My friend, Rose Skinner quilted it using the Baptist Fan. I wanted it done that way to give it the look and simplicity of a well used utility quilt. Like something from the bunkhouse. Great job Rose!
I hope you will all go out and buy this magazine. I want their sales to jump every time I am in a McCall's magazine. Maybe that way they will keep me on!

I have been a bad blogger. I have not been writing, nor have I been visiting. To my defense, I have had lots of company, and between that I have had other uninteresting things to do. And I have managed to do some sewing as well. So, let's get on with the sewing! 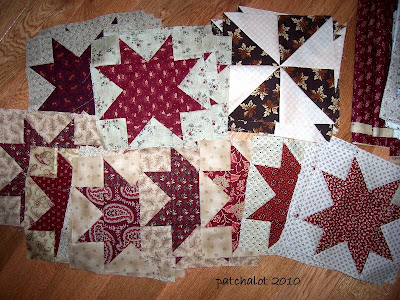 I have been making lots and lots of red stars and brown pinwheels, I got a hold of an FQ pack of Judie Rothermel's Twelve Oaks. Mmmmm, I fell in love. It has the most wonderful brown prints! It had a couple nice reds as well, but not enough for me, so I turned to my stash and pulled red fabrics like crazy. I have a lot of red! But of course we get choosy when we make a quilt and only want certain fabrics. So the hundreds of other reds are patiently waiting their turn. The quilt, it turns out, will be decidedly dark. I am not going to show it yet because you might hate it. As I sewed I tried to figure a name for the beast and nothing suited it. UNTIL..... I thought Rawhide! Remember that old song, "Rawhide"? The whip snapping and the cowboys shouting! Sigh. It is perfect! Of course the next song that popped into my head was "Ghostriders in the Sky", but I doubt that will inspire me to make a quilt. I just know that there are some of you out there who don't have a clue what these songs are. We had our own kind of funky music in the 50's! 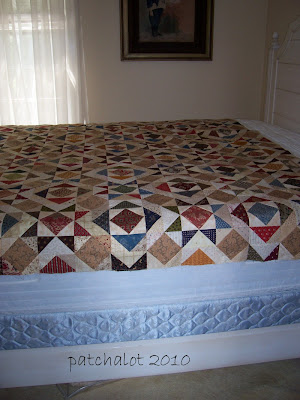 Here is another quilt that I started so long ago that I don't even want to talk about it. I have had a love-hate relationship with this one. I showed pieces of it on this blog in the past, and it has grown since then, but when I placed it on my bed I decided that I really LOVE it and it needs to be much bigger so I can use it on a queen size bed. It truly is a chore making that many geese and square in square blocks, but the end result will be really nice. It's totally scrappy and the soft tan squares that run through it give it a nice warm glow. I promised myself I would finish it before Christmas, but I am afraid another New Year will come and go before it is done. You know I am only human! And I am a one woman act. So it will happen when it happens. And now I am venting about myself!
I will try to post again next week...  Enjoy the remains of August!