One thing you should know about me is that I am nothing if not obsessive-compulsive. I dive into quilting and cannot pull myself away. The same is true of family history and genealogy. I have not been involved in the genealogy for quite a while, but recently have been drawn back into it. Maybe it is the upcoming family reunion in Utah in August, and the ancestor quilt I am making. (You see how nicely I drew two of my compulsions together?) Yesterday I decided to re-type a short history of my great-grandmother's. The photo copy that I have is old and beginning to fade, so I now have it typed in a folder on my computer. The history is very brief, and some of the details are heart breaking. 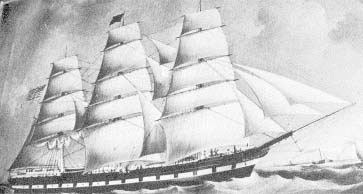 The family's name was Scow. They left Denmark in 1866 to immigrate to Utah to join the other Mormons who had gathered there under the direction of Brigham Young.Their five children were ages 1, 9,12,14 and 18. First they traveled by steamship to Hamburg, Germany. Then on May 25, 1866 they boarded the sailing vessel Kennelworth and spent fifty-two days on the Atlantic Ocean before landing in New York on July 18, 1866. From there they boarded a train to carry them northward through New England. In Canada they had to travel on dirty and uncomfortable freight and cattle cars to Michigan and then on to Chicago. The heat was unbearable this time of year.  Finally reaching Quincy, Illinois they boarded a steamboat that took them to Wyoming, Nebraska. Oxen teams pulled wagons that carried them the rest of the way to Salt Lake City, Utah. The wagon carried their family of seven plus three other women, provisions and furniture. Considering the way we travel today, can you even imagine what this might have been like?
Nine year old Sam became ill with malaria fever and still had to walk most of the way. Grandmother prayed for his life and for four days they expected to have to bury him. They even had burial linens prepared. Finally Grandmother retired to a quiet spot and asked the Lord to forgive her for presuming her child should be saved while she had seen so many others buried by the side of the trail. She said, "Thy will, not mine be done". Sam began recovering and by the time they reached Salt Lake City he could walk by holding on to things.
As they approached Salt Lake City they were met by people carrying baskets of fruit which were freely distributed among them. I imagine they wept with joy.
Their trials were not over, but this part of their journey was. I feel fortunate to know this much about them and what they endured. The personal history was written down as my Great-Great-Grandmother, Catherine Scow Davidson, told it. She was 12 years old during this time. I was able to find other information on line that discussed the very group that they traveled with, both on ship and by wagon. What a thrill for me to be able to add more details to this story! I am so proud to be a descendant of these people and so grateful for their sacrifice. I know they are not unusual in their struggles, they are just mine!

STARS IN MY EYES TOO! 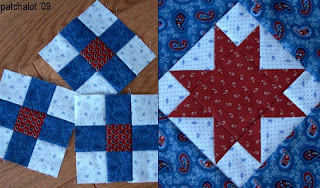 First there was an idea, then a design was developed with the help of EQ6, then came blocks of 9-patches and stars, and finally a quilt! This was supposed to be a quilt for my newest grandchild born last December. I was way ahead of schedule and finished it last summer. So instead of waiting for the baby, I sent the photo to McCall's magazine. They liked it! This is their photo below. 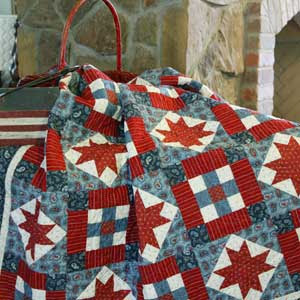 Today I was informed that it will actually be published in the June-July issue of McCall's Quick Quilts! Check out the link to McCall's to get a preview of my quilt, American Dreamer, and all the other quilts that will be appearing in this up coming issue. There is even a link to directions for a queen size version! My quilt is 49" x 49" --a large sized baby quilt, which is a good thing because baby won't be getting it for a while!

This issue will be out April 13 through May 4, 2010. Now I will be circling the mailbox in anticipation!
Here is baby Isaac without his new quilt. See how he is suffering. 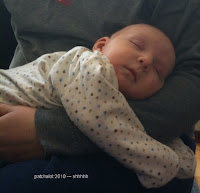 PS: Mary at Quilt Hollow quilted this and did a beautiful job!
Posted by MARCIE at 3:01 PM 28 comments:

A GIFT OF THE HEART 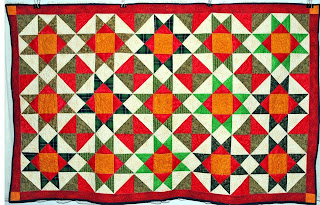 I am always pleased when someone makes one of my patterns and sends me a picture! Some of you will remember this design from last Christmas, it is called Christmas Punch. Wendy Coomer from Cache Creek. BC, Canada made this quilt. Here is what she told me:
A good friend of mine was diagnosed with breast cancer before Christmas. Every day is Christmas to her, she loves Christmas so much, so when I saw this pattern, I had to make it for her.
I made 15 inch squares and the finished quilt ended up being 45 x 70 inches - just a nice size to snuggle in. I'll be giving it to her this week.
Thanks Wendy for sharing your quilt with me and giving me a chance to share it with others!

P.S.: This free pattern is available at www.patchalotpatterns.com
Posted by MARCIE at 10:20 AM 6 comments:

WRAPPING UP AN ANCESTOR QUILT 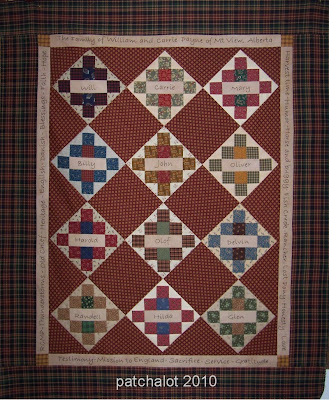 I have been puttering around with so many odds and ends, trying to finish something! Well finally I can call this top complete and ready to be quilted! In fact I made two just alike. One is for our family reunion and one is for me! The family reunion this summer is for the descendants of Will and Carrie Payne of Mt. View, Alberta, Canada. Will was born in Cottesbrook, England in 1866. He went to Canada as a young man and joined the Royal Canadian Mounted Police. Carrie was born in Utah in 1875 and traveled with her family north to Alberta to settle just over the U.S. border in Mt. View. She and Will came together there and at the age of 19, she married him.They raised ten children in a cabin on a sheep ranch. I have no idea how many descendants there are of these two. Several hundred is probably a low estimate. My grandmother used to say that the good Lord must have loved them because he made so many of them!

This reunion is to bring us together to recall our history and our heritage and to honor those who paved the way with sweat. sacrifice and service. These were honorable hardworking people who set a standard that the rest of us are continually trying to live up to.
Making this small quilt has been a joy as I embroidered the names of this beloved family on each block. I know my grandmother would have loved this!

ADDENDUM:  I got this pattern at the Corn Wagon in Springville, UT, 801-491-3551.
The pattern is from Leslie Ison and Norma Whaley of Salt Lake City, UT.


I have tried to recall what my grandmothers smelled like and nothing really comes to mind. I have all kinds of good feelings that surface, but no particular fragrance. My mother, on the other hand, was a perfume junkie and usually smelled of Giorgio or Chanel #5. Everyone in my family remembers that and can be taken back to her memory in a heartbeat with just a whiff.
What do I smell like? Do I offer an unforgettable odor? When my granddaughter remarked that it smelled like a grandma was she referring to me? She would admit nothing! But last week I got an e-mail from her saying that she took some children that she was babysitting over to their grandmother's house and was offered a treat of Diet Coke and Hershey's Kisses. She wanted me to know that she immediately thought of me. I smiled of course, because if my grandchildren know anything about me, other than quilts, it is Diet Coke and Hershey Kisses! I feel quite better now!

THE RETURN OF THE QUILTER

I haven't posted in quite a while, but life seems to fill in the cracks and there is always something going on in my life. I made this quilt last year and just got it back from my quilter, Rose Skinner, here in Virginia Beach. She did a great job and even bought a new template so she could do just what I wanted: Baptist Fans! 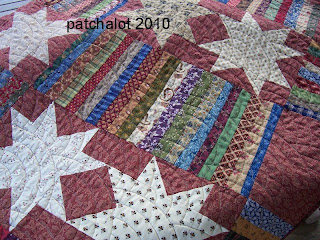 This is a big quilt and boy did I go through lots of strips of fabric. I will show more of this at a future time, but for now it is getting packed off to McCall's Quilting Magazine and we shall see what they do with it! 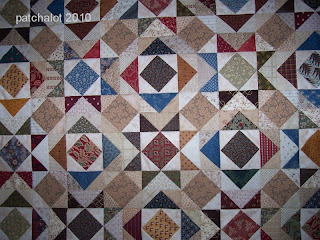 I began this quilt over two years ago, and in fact I had planned to have it finished and a pattern out by spring of 2008. I don't know how on earth this got shoved aside for so long, but I am once again making flying geese like crazy in an attempt to finish it. I still like it, but I can't seem to focus on one thing for too long and this really has A LOT of flying geese! Luckily, if we start to get bored with one process we can move on to another process, or project, as the case may be.

Saturday was the Open House at the LQS. As we sat around visiting with customers and each other, the woman next to me was appliqueing circles down on Western Sun blocks. Oh I remember that quilt, that one is waiting for my return as well. So many UFOs waiting patiently for my return. There is a book title for you: The Return of the Quilter!